ALL THE LATEST NEWS FROM FdM

....LUKEWARM OFF THE PRESSES...
WHENEVER WE COME UP WITH SOMETHING VAGUELY INTERESTING

(AND MORE OFTEN WHEN WE DON'T)

GET THE LATEST NEWS FROM FdM HERE

As usual, festival sponsors the Mantle Brewery are producing a limited run of bottles of their excellent best bitter for our Dr. Sardonicus three-dayer. They'll be on sale in the Cellar Bar during the festival but they're also available by mail order direct from the brewery if you're not able to make it to Cardigan this year - it's a lovely pint! Head off to www.mantlebrewery.com.
(if you ARE able to come along, it's worth phoning or emailing Ian at the brewery to reserve some bottles and pick them up while you're there - the brewery is just a few hundred yards from the Cellar Bar, where the festival takes place)

JACK ELLISTER 'WHEN AN OLD CRICKETER LEAVES THE CREASE'

- taken from their new FdM 7", a lovely remake of The Bees Gees song from their first UK album

an excerpt from the Chocolate Orb dubbed mix - a one-off 12" for Fruits de Mer, and a very special one

'La Comete' - a preview of London Underground's 'Space Edition', taken from their 'Four' album. We've officially sold out already, but you can join the waiting list by going over to our SHOP page - or you might try Heyday, Shiny Beast, Norman, Rough Trade, VOD...

If you're in the UK, you can now pre-order any, or preferably all, of our late-July releases, featuring:

- they are all waiting to share their music with you.

If you're not in the UK, you can pre-order from Heyday (www.heyday-mo.com) or Shiny Beast (www.shinybeast.nl).

The last CD in this year's bumper summer festival FdM goodie-bag of THIRTEEN CDs comes from Mark Mcdowell, who will also be playing live at the 17th Dream of Dr. Sardonicus; Mark has put together a retrospective compilation, taking tracks from all his albums to-date plus two tracks from his next album. It makes for great listening.

There'll be about 60 special edition sets of 'A Different Kettle Of Fish' on sale at our summer festival in Cardigan, comprising the original double LP on black vinyl plus an exclusive bonus LP including a sidelong mix of the band's version of 'Brainticket', which appeared in a more abbreviated form as part of 'Postcards From The Deep' many moons ago; there'll also be a very silly giveaway that will be a sod to post out if we have any left after the festival.

There'll also be about 70 special edition sets of '16th Dream Festival Live', with the original double LP, a CD featuring more tracks from the festival that we couldn't squeeze onto vinyl AND a 7" lathe-cut that we'll tell you about in due course...oh, and two fold-out posters!

We received a small batch of black vinyl sets of Moon Goose's double LP after the original run ran out, but they were quickly snapped up by club members - if you're not already a club member, maybe you should be?

AND THEN THERE WERE TWELVE

The FdM 17th Dream goodie-bag just got even gooder - Kosmic City Records in the USA have put together an exclusive compilation of their bands for you festival-goers to explore - free-of-charge.
Kosmic City is a collection of psychedelic artists from the Kansas City Metropolitan area that venture into psych-pop, prog, krautrock, music cosmiche, 60's rock and post-punk. Kosmic City is founded by Dedric Moore, the founder of the Outer Reaches music fest held annually in Kansas City, Missouri US.
you can find out more about the label - and the bands - at www.kosmiccity.com

Hover over the 'FAMILY FAVOURITES' heading at the top of our webpages and then click on 'Folk Rock UK' or 'Folk Rock US' (there might even be a 'Folk Rock Europe' by the time you read this) and you'll see a whole bunch of recommendations from club members for further listening; you'll see a few more headings too - all a result of me asking club members over the years for their input on various musical subects - I hope they'll encourage you to seek out a few more tracks and bands that you might not have listened to for a while, if at all

Good of Kris Needs to give an early mention to our 'Windmill' 12" in his 'Needs Must' column of Electronic Sound magazine.

A LATE-JULY CROP OF RELEASES FROM FdM

We'll begin taking orders around the end of May, although FdM club members will get priority when it comes to ordering and supplies of the London Underground double LP in particular are going to be in short supply.

Yes, we'll have limited numbers of special editions of both the 16th Dream double LP and Astralasia's 'Different Kettle Of Fish' set on sale at the 17th Dream festival (and others too - news on those soon).
My apologies if you're a club member and you can't get to our annual gathering but Cardigan is a big part of the FdM year and we really try to make it special for everyone who comes along, including having exclusive vinyl for sale. Any copies we still have after the festival will be offered for sale to club members first.
If you're not coming to Cardigan and you're not a club member...well, there's always 2020.

APRIL RELEASES - NOW YOU SEE THEM...

...the Moon Goose 'Source Code' double was an instant sell-out at FdM Towers, the Astralasia double is now also all-gone - although I'm still hoping to get a few extra copies of both releases later this month
And to think 10 years ago, vinyl was dead.

I'm now down to no more than a dozen copies of the festival double.

Thanks to Nick Saloman, we'll have another exclusive Bevis Frond lathe-cut 7" for sale at the 17th Dream of Dr. Sardonicus Festival - two tracks that you won't be able to get anywhere else and might not get at the festival as we'll only have 60 copies for sale - first-come-first-served on the Sunday, when The Frond will be headlining. 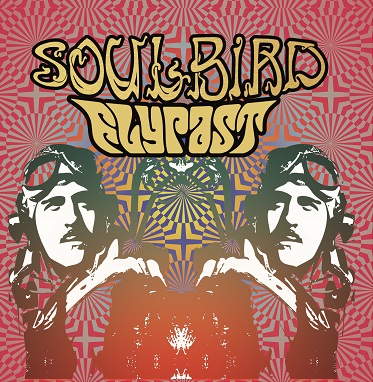 A late arrival in the FdM 17th Dream goodie-bag - a new CD of pop-psych from SoulBird that goes under the name of 'Flypast' - and here's what the band have to say..."SoulBird invited all the music they love to a Mod Hatter’s tea party. The Country Soul already knew everything about cheating and hurting, and got away easily through the keyhole. The Powerpop Glam smashed the door down leaving behind a great big kiss and a wave bye bye, ta-ta.
But the psychedelic pop wanted to be some friendly, stay to be nice and have fun in the sun.
So here it is: Flypast - some stacks from our vaults...

This year's festival goodie-bag is positively bulging - you lucky people.

US band Ex Norwegian have put together a cracking compilation CD of pop-psych (mainly 60s/70s covers) exclusively for the 17th Dream goodie-bag; they contributed a great cover of Family's 'Winter' for 'The Three Seasons' 3LP set last year and their 'Popsike Tryps' CD includes songs originally recorded by 23rd Turnoff, Tintern Abbey, Apple, Nirvana and Bill Fay!
We might not now get CDs from the Buried Treasure label for the festival - but Ex Norwegian have stepped in to ensure a bumper crop of 10 CDs for everyone who comes along!

Ian McCann reviews The Lemon Clocks' FdM members club pic disc 7" in the latest issue of Record Collector - and if you read it carefully you'll see there's also a chance to win one of only 10 rare-as-Shane-MacGowan's-teeth black vinyl copies that were cut by Phil at 345rpm.co.uk.

ANOTHER FISHY FRIEND AT CARDIGAN

There'll be a second FdM lathe-cut 7" on sale at the Cardigan festival - do you know who it is yet?

on a 7" FdM lathe-cut that will only be available at the 17th Dream Festival and in very limited numbers at that; and the consequences are....a long queue at the FdM stall on the Saturday

Huge thanks go to Record Collector magazine, who are very kindly sponsoring our one-day festival in Bristol on November 2nd - lookout for some not-so-subtle advertising from us in next month's issue; should also mean some good competition prizes on the day!

If you need an excuse to get along to Cardigan a day early for this year's 17th Dream three-dayer, how about a pre-festival gig in the Cellar Bar by Icarus Peel's Acid Reign on Thursday, August 1st? Tickets available on the door - what a great way to kick things off!