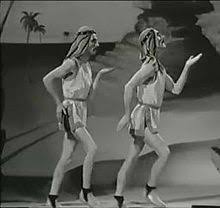 The term 'supergroup' was probably first coined in rock circles to describe the formation of Blind Faith in 1969, combining the talents and egos of Steve Winwood, Eric Clapton, Ginger Baker, and Ric Grech. The resulting sum was rather less than the individual parts, and this has subsequently often proved to be the case...
cf. Beck, Bogart and Appice
Asia, Emerson, Lake and Powell
Tin Machine
...all underdelivering, although McBusted were a notable exception.

In reality, Blind Faith were far from the first - The Rat Pack in the 50s, The Crazy Gang in the 40s, Wilson, Keppel and Betty in the 30s all pre-dated them.

It is, perhaps, interesting to note that when the group's name is simply an amalgamation of the group members' names, disappointment invariably follows - the highly-talented Hunt, Lunt and Cunningham, who played pubs around Cannock in the early 70s, where I was perfecting the art of under-age drinking and falling over, sealed their own fate.

The use of initials doesn't seem to solve the problem and can sometimes create its own, with several bands not making it beyond the drawing board...
cf Trower, Wakeman, Anderson and Twink
Fripp, Lemmy, Osbourne and Palmer
Bruford, Oldfield, Lake, Lynne, O'List, Clapton. Knopfler and Sting...

footnote - It was pretty sobering to look up the term 'supergroup' on wikipedia and find that after 1980 there was hardly an artist or band I'd ever heard of.