WHY JOIN THE FdM MEMBERS CLUB?
...and HOW DO YOU KNOW IF YOU'RE A CLUB MEMBER ALREADY?

that second bit's the easy part - you keep getting emails from me that refer to you as a club member - if you don't then you need to read on a bit further...

if none of the FdM emails you receive refer to you as a club member, you're not yet a club member; if you only ever get FdM emails via mailchimp, then you're not yet a club member; if you're not a member and you're buying (or planning to buy) most Fruits de Mer releases that come out, email me today (fruitsdemer7@hotmail.com) or click on the 'Mailing list' tab at the top of the page, because you're missing out - there's no financial commitment, just a willingness to put up with a few more emails from me, and 'benefits' include a chance to pre-order new releases before anyone else, competitions to win various things and, if you buy vinyl releases from me, members-only exclusive CDs and more.
All that said, if you ARE in the club, this needed no introduction and you'll be getting bored by now - I'll get my coat

If you're in the UK, the special edition of Fishheads includes a t-shirt and a beanie hat, as well as an extra CD; if you're not in the UK, I'm sorry but there's no t-shirt or beanie-hat - and definitely no model (blame Brexit).

HAVE YOU BEEN ORCHESTRATED?

A lot of artists have been over the years and the latest members club competition is looking for prime examples - new, old, classic, obscure - and the suggestions are flooding in.
A goodly selection (goodly?) have been posted on the website under the convenient heading of 'Orchestrated'

Once again, offered club members an exclusive 7" lathe-cut containing two tracks from a club-exclusive compilation CD and it's been hugely over-subscribed. The FdM virtual hat came into play again as Liz drew some lucky names out. Don't worry if you missed out, there'll be another one along soon.

I recently asked club members to come up with some glorious examples of krautrock - old and new - and they have delivered in style. Over 100 recommendations are now posted here on the FdM site - look under 'krautrock' in the index - there's lots to enjoy, including some hidden gems, and there'll be more appearing on the FdM Facebook page.

BIRDS OF A FEATHER LATHE-CUT

I offered club members an exclusive 7" lathe-cut containing two tracks from the 'Birds Of A Feather' compilation CD and it's been four times over-subscribed. The FdM virtual hat came into play again as Liz drew some lucky names out - apologies to everyone who has missed out.

Cecilia and Max have kindly signed a bunch of 12" prints of the new Pinhdar LP and we'll be slipping them randomly into copies ordered direct from FdM or from Shiny Beast.

But I've also put a couple to one side for a members club competition, which I'll tell you about just as soon as I've thought up a suitable subject for it.

BEFORE ONE COMPETITION ENDS, ANOTHER ONE BEGINS

While the Euros run their course, we're almost up the the end of the first half of 2021, so it's as good a time as any to ask club members to recommend their best/favourite new releases/reissues of the year so far. No FdM records, even I'm a but more subtle about self-promotion than that, but the best of the rest!
I'll be posting links to as many of them as possible on the FdM website in the next week or so...

38 games in and 101 goals scored, which suggest the club member competition is heading towards a correct total score of around 125-140 goals. Of course, the knock-out games could go into extra time, so maybe a total of around 140?

Club members have a chance to win a set of Sendelica 'Cromlech IV' test pressings by guessing how many goals will be scored in the European Championships - estimates of the total number of goals scored throughout the competition (excluding penalty shoot-outs) range from 51 to 207, and the most popular choices of finalists are France, Italy, Spain and Germany.

BIRDS OF A FEATHER

Club members who order the new Sendelica double LP direct from FdM - or through Shiny Beast - nice and early (not yet - we won't start taking pre-orders until June!) will get a free copy of an exclusive FDM compilation CD called 'Birds of a Feather' - and very nice it is too.

FdM club members can win the new cassette EP by Magic Cobra, who are featured on our 'Bare Essentials' CD. If you haven't received an email explaining the competition, you're either not a club emmber or I've disappeared into your spam box again

A recent FdM competition has been looking for images (photos, paintings. digital art, illustrations, cartoons) that I can nick for the FdM website and Facebook - and I've already starting to use them

This will be our first members club exclusive CD of the year - 10 tracks by artists that are all new to Fruits de Mer, and might be to you too (although we do have a couple of legendary krautrockers in there somewhere, so maybe not).
The idea of these CDs was to introduce you to bands and music that I'd love to put out on vinyl but haven't got enough hours in the day/space in the FdM global warehouse/funds in the FdM piggy bank to do everything...I think 'The Bare Essentials' fits the bill rather nicely.

Pop goes freakbeat, genius goes soap opera, bubblegum goes into reverse - club members are unveiling the hidden talents of artists best known for one thing, but who tried their hnds at something completely different.

Check out the 'Hidden Talents' tab

THE FIRST MEMBER CLUB SPECIAL OF THE YEAR

Although the first FdM vinyl release of 2021 is still some way off, I've just about finalised a members club special - it's another compilation CD, 75 minutes of rather fine music and with the slightly different spin to previous ones in that all the artists involved are completely new to the label. more news soon...

Our first competition of 2021 and this one is the result of a youtube video sent to me by Allan Fredrickson as an entry for the last competition! Allan sent me a truly dreadful Finnish version of Y.M.C.A. – but what made it stand out was the appearance on bass guitar of Finnish jazz/rock legend Pekka Pohjola!
...so the new FdM members club competition is to send me examples – with youtube links – of well-known musicians, who will be known to FdM followers, making guest appearances in the most unlikely of places

THAT WAS THE YEAR THAT WAS

EVEN THEIR MOTHERS WOULD HAVE HATED THEM FOR IT

Our last competition of the year looks for covers of classic songs that should have been buried in concrete and thrown into the Mersey but somehow found their way onto vinyl (or CD)...the unbelievably bad, and worse...
It's club member Till Wolff's fault - he came up with
...I thought it was impossible to top it (or bottom it), but I was wrong; entries closed on Christmas Day and then the dross started to be revealed - they are posted under the tab 'covers of shame' at the top of the page) 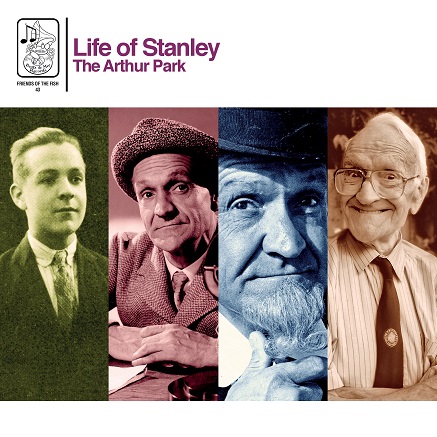 PHIL THE LATHE-CUTTER IS CONJURING UP ANOTHER 20 COPIES

I've been swamped with club member requests for copies of 'Life Of Stanley'.
I'd asked Phil at 345rpm.com to cut 70 copies, which meant I'd have 50 for sale to club members (once the band, Nick at Heyday and I had grabbed some for posterity); but Phil has kindly agreed to cut a further 20 as a special favour - he was due to pack up for the year - so I'll now be able to let 70 club members enjoy Prof. Unwin in full flow.
My apologies in advance to everyone who misses out.

LAST NIGHT OF THE PROMOS

There's a quick members club competition running right now to win copies of some recent promo CDs that didn't make it into the hands of reviewers/DJs/bloggers. If you're a club member and you haven't already received details of the competition, please email me

A wonderfully mad members club-only, ludicrously-limited, luck-of-the-draw, members only single-sided lathe-cut 7" to end the year, thanks to Pete Bowman and The Arthur Park.
Are you sitting comftybold two square on your botty? Are you ready for excerpts from exclusive interviews with the wondrous Professor Stanley Unwin, with a little light instrumental backing from The Arthur Park? More news soon.

PICK UP THE PIECES

Club member Ron Backx won a 'Band for All Seasons' jigsaw in a club competition earlier this year - and he took time off from listening to the 4CD set to put it together - good work, that man!

ONE FOR THE ROAD

We have one more members club exclusive CD for you this year - and it's a bit unusual.
As you know, Swordfish has been having fun with the Soft Hearted Scientists' instrumental tracks this year; well, he did one more mix - except this was less of a mix more of a...er...mash-up? The starting points were the SHS back-catalogue and the soundtrack to a film that both Marc and I love - except we were thinking of different films...

For the Soft Hearted Scientists vinyl extravaganza I ordered ‘completely random’ colour vinyl from the pressing plant and had no idea what I might get in return – and I still didn’t really know when they arrived as the sets reached me shrinkwrapped and were posted out shrinkwrapped that yway (unless club members asked otherwise).

From the few sets that I HAVE seen, most copies seem to be on rather subtle/muted/tasteful shades of grey vinyl...so the latest members club competition asked for club members to show me what I'm missing by sending in vinyl selfies of 'Continuing Escapades', with a prize of a complete set of test pressings as the prize. Here are a few examples of what you sent in...


...perhaps the prize for the 'best' slab of vinyl should go to John Parry, who might have used a bit of artistic license to come up with...

...unfortunately, there isn't a prize for 'best' photo - sorry John!

Club members have suggested a host of records that would make excellent reissues and previously-unreleased tracks that could be unveiled on vinyl for next year's major label and ebay flipper fest...sorry indie record shop benefit gig.
I'll post a few at a time here and on the FdM facebook page - decent record labels, please take note...

more club member recommendations for records that would make excellent reissues and previously-unreleased tracks that could be put out on vinyl for RSD 2021...


Keef Hartley Band - The Time is Near, Oliver - Standing Stone, Rupert Hine - Pick Up A Bone, Shusha - Before The Deluge
...LPs recommended by Brian McMaster 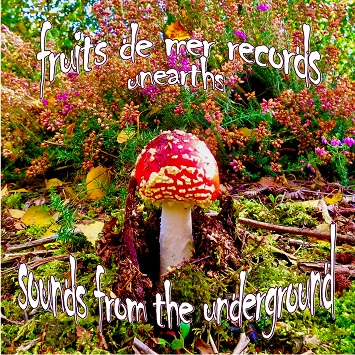 SOUNDS FROM THE UNDERGROUND

We've lined up another club members-exclusive compilation CD for club members who buy the vinyl goodies we're releasing in early November - this one brings together friends of FdM old and new...from Eastern Europe, South and North America...and Birmingham

and even older ones at www.fruitsdemerrecords.com/membersclubancientarchive.html