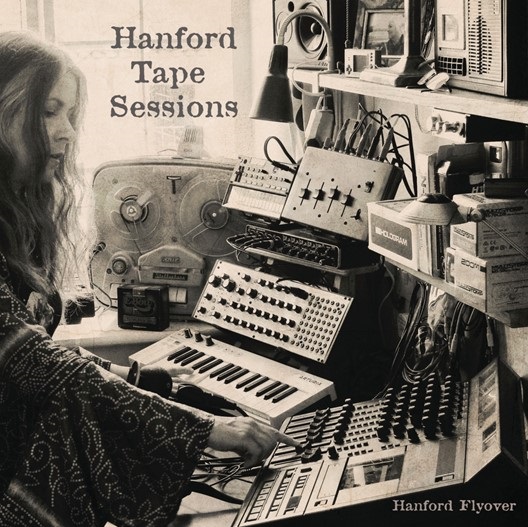 
Hanford Flyover have spent the lockdown locked in a studio - and the time was well-spent as they've emerged with an album's worth of new songs.

Hanford Flyover are Holly, originally from Louisville Kentucky, and Josh, from Staffordshire; their musical influences include The Doors, The Beta Band, Air and nods to many of the great 70’s bands.

Fruits de Mer found Holly and Josh when we were putting together a compilations of 60s psych covers – their version of the much-neglected Neon Pearl’s ‘Just Another Day’ became one of the stand-out tracks on our 4CD set ‘A Band For All Seasons’, as well as appearing alongside Chad & Jeremy and Schizo Fun Addict on a 7” EP taster for it, called ‘Sunny Spells’.

Onto the Hanford Tape sessions…during the lockdown, Josh rebuilt four old cassette porta-studios and with the help of Holly began recording on them, which, through the limitations of tape recording required keeping things to the raw musical essence. The resulting tracks are musically diverse but linked by a common theme - reflections of the ‘unusual’ times we live in.

We would have loved to have it available for the 18th Dream festival - but that is now delayed until summer 2022, so instead we made it a members club priority ordering release.

But why on CD? It was a choice between forming a seven month long queue to get an LP pressed - yes that's how long it can take to get a new release produced these days - or crack on with making the music available before the lockdown ends - or another one starts.

PLEASE NOTE: THERE WERE ALSO JUST 20 COPIES OF THE ALBUM AVAILABLE AS LATHE-CUT LPs, MINUS ONE TRACK THAT WOULDN'T FIT ON IT; AGAIN, A FEW FdM CLUB MEMBERS WERE OFFERED OUR COPIES AND JOSH & HOLLY HAD 10 COPIES THAT THEY FOUND HOMES FOR