"...could easily be a great lost UK underground classic..."

...so says Nick Leese from Heyday Mail Order!
FdM fans will already know and love Cranium Pie for their single 'Baby, You're A Rch Man', their version of Brainticket's 'Blacksand' on 'Roqueting' and for their new-material single on Bracken. For some bizarre reason, Rob and the band agreed to let us release their first LP - and we are mightily chuffed. It's called 'Mechanisms', it went on sale on September 5th and it sold out immediately
'Mechanisms' is a concept album, i asked Rob what the concept is/was, and he said, "From the radioactive dust of a post apocalyptic mecha-tyranny, simple lifeforms strive to fulfill the wishes of 'the blinking eye', and create the ultimate homunculus, destined to fight for the right of the organisms", but Rob's not been well lately; basically, it tells the story of a war between robots and crayfish (we're supporting vthe crayfish). What's more, this is only the first part of the fishy saga, Part 2 will arrive next year, at which point all will become clear (probably).
I've been listening to the album on repeat i think anyone who likes classic prog bands such as Nektar and Caravan will just love it. I can also hear 70's Pink Floyd in there, maybe King Crimson, The Nice, Triumvirat, even early Orb! The band say their influences include Frank Zappa, Jimi Hendrix, the Canterbury sound, 60s/70s psychedelia and progressive rock in general - but only Cranium Pie could pull it all together and create their own sound.

Red vinyl, lovely gatefold sleeve...we got around 400 copies to sell through our website and they all disappeared immediately. FdM members got priority, so there's no better time to join the club (just email andy@fruitsdemerrecords.com, convince him you have every intention of buying all our future releases and you're more or less enrolled). If you think that sounds like a cunning plot to rip you off, then you obviously don't know us very well; no matter, you can still email andy@fruitsdemerrecords.com and he'll do his best to help you track a copy down OR you can pick up the album on CD direct from the band at www.craniumpie.co.uk 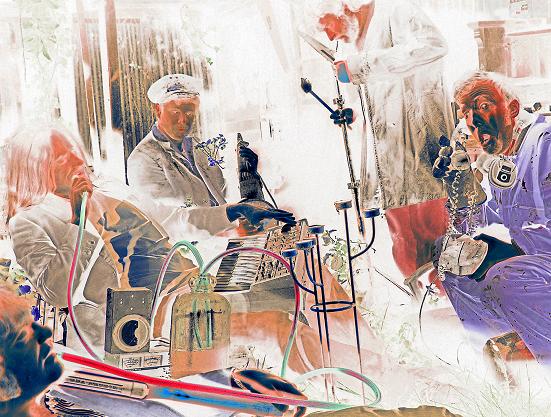 Geoff Barton (the god father of PROG!) reviews the album in the new issue of Classic Rock...

"We're used to listening to bonkers concept albums here at the prog column. Comes with the territory, obviously. Having said that, we were still surprised by Mechanisms (Part 1). which tells the tale of a civilisation of lobsters (yes lobsters) rising up against an evil tyranny of robots. Off-the-wall subject matter aside, this is a masterclass in hyper-eclectic prog, with Rob Appleton (purveyor of "synths that the stomach turn inside out and your ears reach into inifinity") and space-ace guitarist Tim Bray excelling in their respective roles.
Opening track This Was Now -Awakening of the Birds sounds like Pink Floyd playing Riders On The Storm (thermi-Doors, anyone?); Rememberrr (sic) is based on a sprawling Caravan-style keyboard solo; Zones - Mothership (Reprise) reveals that when lobsters speak they sound very much like underwater Daleks. The album reaches a claw-clenching climax with the clunky Hawkwind-isms of Run To Survive (Scuttle, surely? - Ed).
conclusion? Cranium Pie are as mad as fishes. Well, crayfishes, at any rate."
8 out of 10

'Mechanisms' is also listed as being on the Classic Rock office playlist, with the comment, ""irect from Cranium Pie's secret baking research centre in deepest subterranean Wiltshire, prog fans will relish this tale of lobsters (or possibly crayfish) rising up against an evil robotic tyranny. Im agine Caravan abandoning their Canterbury roots and going completely crustacean - if you can" ...nice

...and here's a review by our good friend Nick at Heyday Mail Order, in his blog, which can be found via a link on his home page - www.heyday-mo.com

Nick's a long-term supporter of FdM but he's not necessarily a big progressive rock fan, so treat this as serious praise....

"Now onto the weird and wonderful world of Cranium Pie! Veterans of the Fruits De Mer / Bracken labels and now the debut album release for their sister label Regal Crabomophone. 'Mechanisms Part 1' is out on vinyl only in September with 'Mechanisms Part 2' to add to it next year (the album will be presented in a lovely gatefold sleeve for this purpose!).
'Part 1' shows just what this band is capable of away from the confines of a seven inch single. Being unashamedly a progressive outfit in the traditional 70s style, the album format suits them better, and this is one 'out there' experience to hear!
Apparently the CDR I've been listening to is taken from mp3s and are not the final mixes! There's even more overdubs and weirdness in store for the final product! (Nick's dead-right! ed)
Blimey, how did they find the room for all this craziness? Pass the brandy!
First few listens and I hear the influence of Pink Floyd, there's a little Nektar there too with a healthy dose of The Nice thrown in. This could easily be a great lost UK underground classic!
There's crazy guitar and organ leads pulling you every which way between the ears, plus weird voices too (oh, the memories of watching Dr. Who as a kid and running behind the sofa when the Daleks came on! Some of the voices remind me of the Daleks, but I'm all grown up now, and I’m not scared anymore – so there!!!) More voice overdubs are promised in the final mix though, so that could be a testing time for me - there's no sofa at Heyday!)
Yep, this is a total prog wipeout in the good old fashioned sense! It’s a concept too, but as with the earlier '70s concepts this can mean everything and nothing - just dig the music!
The Bracken single 'Rememberr' and 'Mothership' is included and fits in well, but I am really enjoying the whole package, like you're meant to!
Really, this is one journey through space! I didn't think people could make albums like this anymore, and it's actually refreshing some people still want to!
No pomp and ceremony with this one - In Prog We Trust!"

Our promo blurb for the album...

Cranium Pie will already be well-known to followers of Fruits de Mer Records thanks to their brilliant, organ-drenched proggy covers of classic tracks by Brainticket, Eddie Cochran, Dantalion's Chariot and The Beatles (I kid you not); their Dantalion cover, 'Madman Running Through The Field', was picked up by Amorphous Androgynous for the first of their amazing 'Monstrous Psychedelic Bubbles' compilations. And now here is the Pie's first LP - all self-penned material and a concept album at that. When we asked band leader Rob Appleton what the concept is/was, he said, "From the radioactive dust of a post apocalyptic mecha-tyranny, simple lifeforms strive to fulfill the wishes of 'the blinking eye', and create the ultimate homunculus, destined to fight for the right of the organisms" (Rob's not been well recently, but I think he means it's something to do with a civilization of crayfish fighting against robots, which is absolutely fine by this crustacean-fixated record label - and to think this is only Part 1, with more to follow in 2012, when all will undoubtedly become crystal-clear).

Shellfish fans aside, having listened to mp3s of the tracks, we think fans of Nektar, Caravan and Pink Floyd will love it (although the band also mention Frank Zappa, Arthur Brown, Hawkwind, Gong and Hendrix as influences) but Cranium Pie add great musicianship and their own unique take on classic prog rock to create something new and very special.
‘MECHANISMS’ is being released on our spin-off label, 'Regal Crabomophone', created specifically to allow us to put out new material as well as covers from some of our favourite bands. This will be a very limited joint-release by us and the band – Around 500 will be pressed up, we'll sell 350 or so through our site www.fruitsdemerrecords.com (yes, this one), while the band and a few friendly record shops take the rest. Our batch has sold out on pre-orders alone, so anyone wanting a copy should try emailing andy@fruitsdemerrecords.com pretty sharpish and form an orderly queue.

'MECHANISMS (part 1)'
From Cranium Pie's secret baking research laboratory in deepest subterranean Wiltshire , part one of a mechavision from the future has successfully been psyonically retrieved and transcoded, and is now ready to be heard in technicolour sound...'Mechansims pt 1' "From the radioactive dust of a post apocalyptic mecha-tyranny, simple lifeforms strive to fulfill the wishes of 'the blinking eye', and create the ultimate homunculus, destined to fight for the right of the organisms"

The intrepid mechanauts are:
Rob Appleton - All non household keys and assorted synths that make the stomach turn inside out and your ears reach into infinity. And some words.
Tim Bray - More words than most. Tea boy, bells, jamesons, whistles, theremin, ring modulator, tremulated screams, sea monster exorcist
Dan Herra - Words. Keeper. poker and taunter of feral cats trapped in his amplifier .Player of Les Paul and Stratocaster guitars and demonic stomper of the pedals.
Steve Meadows - The digger of weeds and deep holes. If there was trouble to be found, Mr Meadows is always close by and occasionally plays the bass guitar.
Julian Smith - Every summer the ladybird king takes residence behind the drums and summons his loyal servants forth, then fifth. Words.

Track listing:
1 this was now - the awakening of the birds
2 rememberrr
3 zones - mothership (reprise)
4 drying in the sun
5 mechanisms
6 run to survive