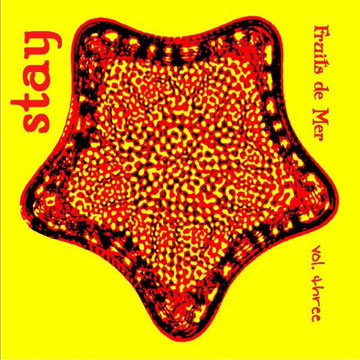 Three classic tracks plundered by these pirates of the Spanish Main (theyâ€™re from Barcelona), and reinterpreted in a way we can only hope Graham Nash 'Chicago', The Rolling Stones '2,000 Light Years From Home' and Strawberry Alarm Clock 'Rainy Day Mushroom Pillow would be proud of. Limited to 300 translucent gold doubloon vinyl pressings, order now for $7.50 delivered anywhere in the world.

Peter J Brown aka Toxic Pete
"'Rainy Day Mushroom Pillow', '2000 Light Years From Home' and 'Chicago'; three classic songs from the past given new life and re-born by Barcelona's four-piece psychedelic indie rocksters, Stay. Another crackin' example of Fruit de Mer's innovative and exotic taste for 'musical re-incarnation'. Here, the mighty Stay bring the music of Strawberry Alarm Clock, The Rolling Stones and Graham Nash right back into the heart of 00's rock'n'roll music scene. I love the idea behind all of this and, so far, I've loved everything that Fruits de Mer have thrown at me.Stay rejuvenate the songs by adding new vibrancy and fresh guts to the inherent great writing. My particular favourite here is, without doubt, 'Rainy Day Mushroom Pillow'; Stay have magically managed to retain the whole psychedelic undercurrent of the song but made it very 'now' and it's actually turned out to be a commercially viable work even though its title gives the game away somewhat. Stay up the ante with '2000 Light Years From Home' - another fantastic re-modelling that again could be right 'now'. 'Chicago' retains much more of it's 70's vibe and is probably the least known song of the set here. Once again Stay give it plenty and re-invigorate the song beautifully. 'From small acorns, big oak trees grow' - Fruits de Mer and Stay take the young seeds and nurture them to become elder statesmen of the music world - brilliant!!" 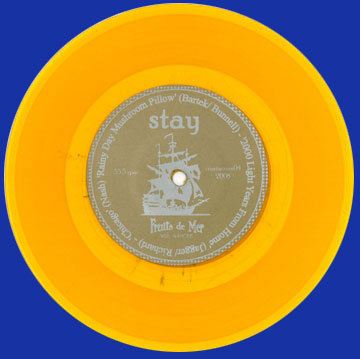 Unpeeled
"THE SPANISH... Usually quite content with shagging trainee counsellors from Kent and pushing donkeys off the top of church towers (haven't they got this the wrong way round?) they now come swaying from the cover of falling leaves with a neat and sweetly psychedelic band called Stay and we're like, well into their "Rainy Day Mushroom Pillow" single, which spoils the surprise... STAY: 'Rainy Day Mushroom Pillow'(Fruits de Mer) SOUNDS LIKE? This band are Spanish! And... They're good! Which kind of spoils the suspense for those wading through this bit before savouring the tart bite judgement of the 'IS IT ANY GOOD BIT?'. Sorry about that. Adopt recovery position and claim that Stay are a tip-top late sixties stylee groove-fest, complete with funky guitar chords, throbbing organs (they can't help it, it's hot in Barcelona) and spot on, spacey, trip out, wig out lyrics. IS IT ANY GOOD? Er, yes. Man."

Mark at Losing Today/ The Sunday Experience
"Some labels eh - not content with serving up one assured gem seems the Fruits de Mer workshop have been burning the candle both ends so to speak because no sooner do we dispatch with much fondness one release then along comes another in quick succession. The phrase "London buses" springs to mind. Stay hail from Spain - to be more precise Barcelona in case you were desperate for the information. This lot number four in the ranks and to date have released a handful of home grown 60's styled singles that we'd like to assume have been eagerly snapped up by the sunglasses adorned in crowd. Again limited in quantity and pressed up on coloured wax replete with fetching inserts this decidedly tasty slab of groove features three covers of certified nuggets from the celebrated kaleidoscopic pens of Strawberry Alarm Clock, Rolling Stones and Graham Nash. Opening with Strawberry's 'rainy day mushroom pillow' Stay embark on a lazy eyed head trip. Deliciously festooned with swirling Hammonds this little cutie apply with sugar glazed brush strokes is endowed with a mallowy aura that's sumptuously laced with trip wiring hallucinogens and lavishly decorated in mind vaporising dream coats of arabesque mirages that sound for all the world like they've stepped straight into the cold bright light of a late 60's morning sun from an evenings festivities at the UFO club. Next up a spectral and overtly mellower take on the Stones star glazed '2,000 light years from home' which I'll admit has recently been found looming on our player courtesy of Beyond the Wizards Sleeves re-drill of it which had spending the best part of a day during the summer trying to weed out our Stones copy mainly due to the fact that we'd forgotten how bloody good the cut was, left to the Stay lads a loose drifting gem appears in view that strangely sounds not unlike a seriously chilled out Charlatans shimmying up to a 'Planecrash' era Inspiral Carpets. Best of the set is their recalibration of Graham Nash's immortal 'Chicago' - a stunningly drifting country tinged power driven cutie superbly dashed and haloed with some moments of sublimely smoked passages of freewheeling drive time AOR that had us recalling some of the finer moments from his old sparring partner Neil Young's back catalogue as though being recast by an in form early career Teenage Fanclub. Utterly recommended listening"