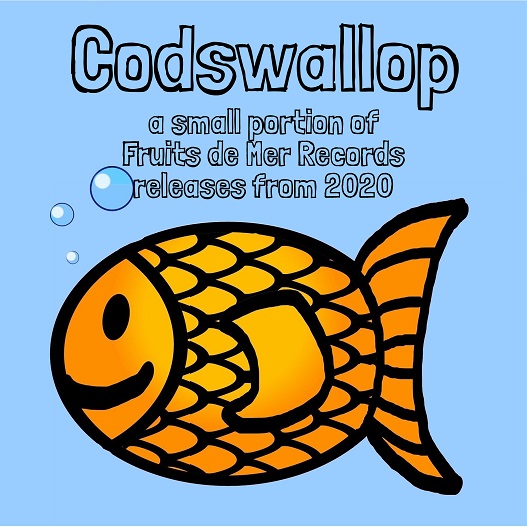 What a mad year it’s been, in so many ways. In what was supposed to be a quiet year for Fruits de Mer, we’ve somehow ended up releasing more music than ever before – 7” singles, double LPs, a triple LP, a 4 CD set, even two 6 CDs sets!

60s psychedelic covers, 70s synth/kosmische sounds, Italian instrumental progressive rock, new psychedelia, an Edgar Allan Poe classic put to music, a tribute to Professor Stanley Unwin – you know, more of the usual sort of stuff you get from Fruits de Mer Records..
Along the way, we’ve raised money for Cardigan’s Cellar Bar – home to our annual summer festival - and for the Red Cross disaster fund; and we’ve somehow persuaded a bunch of artists who should have known better by now to record for us again, along with LOADS of bands who clearly didn’t know what they were letting themselves in for as they became friends of the fish for the first time.
‘Codswallop’ pulls together a few artists and tracks from 2020 that might have escaped your attention first time around, in the hope that you’ll give them a listen and maybe some airtime, so they might be fooled into thinking they’ve been working with a proper record label…

4. Elfin Bow ‘The Autumn Stone’ (live – recorded at our annual summer festival in 2019)
5. Fuchsia ‘Fuchsia Song’ (acoustic mix)
6. The Bevis Frond ‘I’m Here and It’s There’ (previously unreleased)
…all taken from the 2CD set ‘We Are The Cellar Bar Restoration Society’

7. The Insektlife Cycle ‘Our Jitterbug’ …taken from their lathe-cut 7”

10. Anton Barbeau ‘Berlin School Of Doubt’
11. Trace Imprint ‘Flow and Connect’
…both taken from the 2LP+2CD set ‘Head in the Clouds’

12. The Blue Giant Zeta Puppies ‘The Magician’
13. Use Of Ashes ‘Silly Putty’
14. Us and Them ‘Annabel Lee’ (words by Edgar Allan Poe)
…all taken from the 6CD set ‘The Darkest Voyage’

15. The Superstars ‘Metamorphosis’ (live)…taken from their 7” EP

and ends with...
16. The Arthur Park ‘Life of Stanley’…our last release of the year – featuring interviews with the late, great Professor Stanley Unwin, backed by The Arthur Park – this will be a super-limited 7” one-sided lathe-cut

email fruitsdemer7@hotmail.com if you're not already a club member and you'd like to know about it.

Or if you'd just like to join our main mailing-list, click HERE and you'll hear about everything we're up to almost as soon as we know ourselves