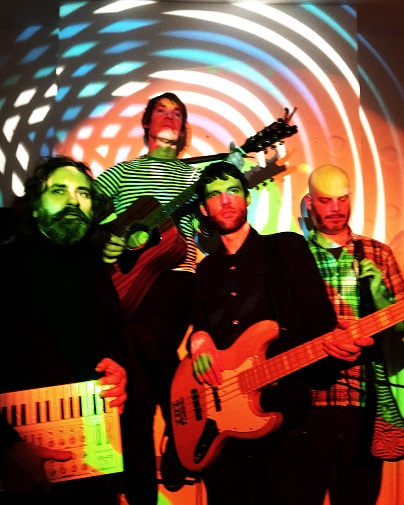 Hopefully to coincide with our May 12 gig in Glastonbury, Mark is self-releasing his excellent 'Dark Weave' album on vinyl - a limited run of 300 copies, all on green vinyl

Once in a while, I do my best to help spread the word on a self-released album by giving it a 'Friends of the Fish' catalogue number - and this is one of those times! The album is released by Mark, not by FdM, so you'll be supporting the artist direct if you buy a copy from him.

...and just to prove I'm not alone in thinking it's a cracking album, here are a few reviews of the CD release:

Shindig... Dark Weave derives much of its success from its artfully constructed textures. Analogue bubbles and drones are at play here as Mark McDowell and Hannah Moriah’s vocals commingle with acoustic lines and Indian strings, on this fine and varied offering.
Greg Healey

Days of Purple of Orange... It is the vocal songs in which McDowell really shines....'Elizabeth' is majestic, my fave on the album and 'Look In The Dust' is folk-a-go-go, complete with Hammond organ. It is a highly enjoyable album that brings a smile to the face at every turn.
http://dayzofpurpleandorange.blogspot.co.uk/2017/06/review-mega-post-2.html?q=marc+mcdowell

Harmonic Distortion... Suffice to say that Dark Weave has been my favourite album of the summer and will be getting played over and over as we head into Autumn and Winter. It's that kind of record. Pastoral folk mixed with subtle electronica if you want to place it within genres. But I suggest just listening with open ears, hearts and minds and see where it takes you.
Duncan Fletcher - http://harmonicdistort.blogspot.co.uk/2017/09/mark-mcdowell-and-friends-dark-weave.html

Bliss Aquamarine... whilst Look in the Dust is an amazing slice of 60s-ish garage folk-rock; Walking Back To You is a very lovely laid-back song that draws from American folk-rock whilst having the potential to appeal just as much to an indie-pop audience. Really superb stuff, highly recommended.
Kim Harten - http://www.blissaquamarine.net/albumreviews30b.html

Astral Zone Blog... It’s really nice to know that people are still making great, experimental acid folk that has both emotion and psychedelic elements. There’s something ancient and something from outer space. “Service of the Owls” has beautiful twin-vocals and a melancholic mood. I love Mark’s vocals and the female singer Hannah Moriah is also excellent. I can hear echoes of the cream of the old UK acid psych acts, wonderful.
http://astralzoneblog.blogspot.co.uk/2018/01/mark-mcdowell-and-friends-dark-weave.html