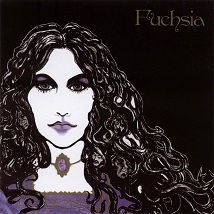 please go to our SHOP page for some stockist options

to coincide with Fuchsia's appearance at Fruits de Mer's annual summer festival, FdM is proud to be able to reissue the band's remarkable debut LP - the first legal re-release on vinyl for years (by kind permission of Cherry Red Records).

Now as this is the first time we've been allowed to reissue a bona-fide classic album, we've let it go to our heads and extend the release to a double album, including early demos not previously heard anywhere, new recordings of songs that pre-dated even Fuchsia ...and one or two other things we've been working on with Tony Durant to make it a very special package.

...not least of which is a reprint of the superb 16pp feature on Fuchsia taken from a recent issue of Flashback magazine, with thanks to Richard Morton Jack

The full package comprises:
- a double LP - the original album, which was released on the Pegasus label in the UK and Kingdom in France, plus a second disc of early demos and new recordings of old songs, including a 15 minute demo recorded by the band before they signed to Pegasus that only exists on a slightly-worn acetate!

- a 60" square fold-out poster of the original album cover, which was drawn by Anne Marie Anderson (who also designed Caravan's 'Land Of Grey And Pink')

- a 24pp A4 magazine, with Richard Morton Jack's comprehensive 'Flashback' feature and a reproduction of Tony's handwritten lyrics from the time

- a gatefold sleeve, with new sleevenotes written by Tony, including his desription of each track on the bonus album


if you're not on the FdM mailing-list, please email fruitsdemer7@hotmail.com