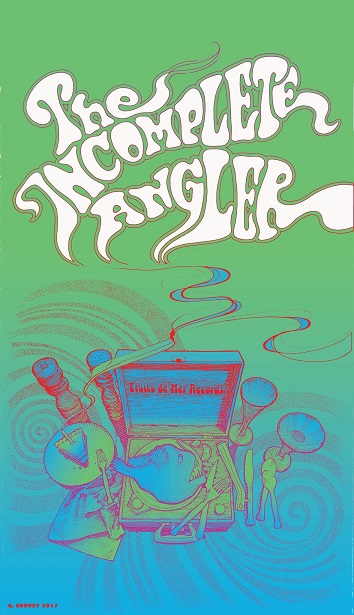 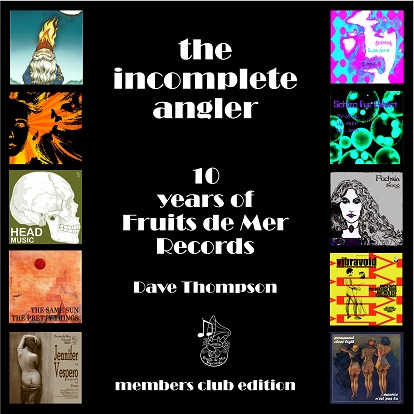 Goldmine magazine's Dave Thompson has been a great supporter of FdM over the years, so when he got in touch to say he was planning to write the story of the first decade of the label, it seemed churlish of Andy and I not to offer to help (churlish? we were as gobsmacked and as smug as the stagehand when he was told he had to paint Shirley Eaton in 'Goldfinger' and was given a 1/2" brush and three hours to do the job).
True to form, we persuaded various club members and artists to do the real work and fill in the gaps in our knowledge, which proved to be of Grand Canyon proportions (actually, Andy remembered pretty much everything from the early days, I haven't got a clue what's happened from 2012 onwards, and that's not just the record label)
In the end, Dave's done such a terrific, comprehensive job, I've given it its own 'Friends of the Fish' catalogue number and there'll even be a limited-run members club edition

format will be an 8.5" square paperback, lots of photos but black and white throughout due to the crazy costs of colour.
It'll have everything from the most comprehensive discography of the label to-date (yes, better than discogs and far, far better than anything I could have come up with), to interviews with lots of the artists that have appeared on the various FdM labels, to club members talking about accidentally treading on the label and not being able to scrape it off their soles, to Andy and I droning on about how wonderful we are.
And it'll run to well over 200 pages - it would have been a lot more but Dave got the hacksaw out and edited it down mercilessly - especially our bits.
You can pre-order direct from Dave Dave Thompson's book on Fruits de Mer's first 10 years is almost ready to go off to the printers - and Dave is now taking pre-orders here


I've been working with Dave on a limited-run members club edition, which will come out a little after the first version, but hopefully in time for our Glastonbury gig; virtually indistinguishable from the main edition, it'll have about a dozen more pages of photos and a different cover, we'll also tip in some past sleeves on postcards, a copy of Ilona V's 'lost FdM single' (check it out elsewhere on the site) and one or two more wholly superfluous items