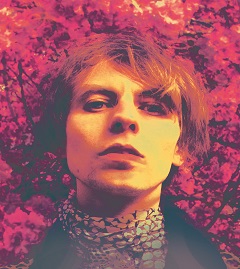 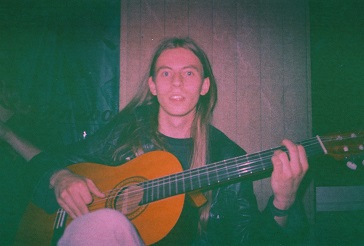 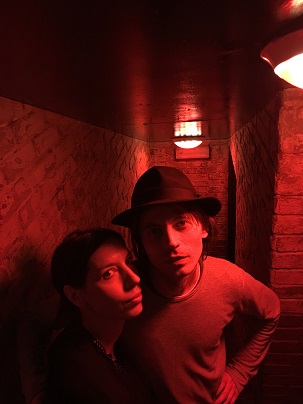 "I never had a pet, it was always my girlfriends who brought animals into my life. First a cat (died recently) then a parrot (died back then / hung itself in its cage! / I still have one of his feathers),"

What was the first record you bought? When, where and why? Where was it the last time you saw it?
I was 8 years old and my father got me the red Beatles 'Best Of' Compilation on cassette (1962-1966). A year later A Hard Days Night, Love Songs and McCartneys Rock & Roll album followed, all Russian pressings bought in Poland. I still have them all.

What was the first gig you remember going to?
Ugly Kid Joe, with T-Ride as support. It was all far too loud and too heavy for me at that time, and my mother didn't want to let me go, as the ticket mentioned an age restriction of 16+. I went anyway and met the band and got autographs. I would go to many more heavy rock / metal shows in the following years and most of the time meet the bands too.

What was the first gig you played? what was the name of the band and what kind of stuff did you play?
I was thrown into deep water ;-) playing violin, with a class mate accompanying on the piano, as 8 year olds in front of a christmas school party (sort of) audience. I was so stressed and nervous that we had to repeatedly start that piece again and again... it was kids screaming, and their parents chatting in the background. It was no fun. Our fathers stood beside us and recorded every bit of it.
Classically trained people treat their kids bad, man...

What was the name of the first song you wrote/recorded/released?
We all played in grunge and heavy rock bands, demos were being made. First real demo cassette release or so, must have been either with Mutilated or Corporal Defect you later became Hirsute. My first proper release was with The Angina Pectoris - 'Tonight' single. I play lead guitar.

Other than the people you currently play with, describe your dream backing band
Zappa had incredibly good line-ups.

If you were stranded on a desert island with a record-deck, which three albums would you want with you?
Johan Sebastian Bach - Henryk Szeryng - 6 Sonaten und Partiten fuer Violine Solo A collection of Beethoven works and Rubinstein playing all Chopin Nocturnes.
But if only rock albums (no compilations) are allowed then I'd take the White Album, Animal Collective - Merryweather Post Pavillion and The Songs of Leonard Cohen

What is your favourite era/genre of music?
I don't have a favourite era, because every era has its gems. and (almost) every genre offers something unique. I prefer open minded music. An approach often found in jazz, in progressive/psych and avant-garde rock, modern classical/composed music is also very interesting sometimes.
For the sound of recording I tend to like late sixties and the seventies the most for rock and pop music, and mid eighties for dance stuff. And the last 10 years or so for electronic playfulness.

...and your favourite band/artist/album of the last five years?
Chris Clark - Iradelphic

Who do you regret never seeing live?
Zappa

Which artists/labels have you collected over the years, if any?
I'm not a real record collector, but I have a lot of stuff by: Beatles, Doors, Stones, Leonard Cohen, Led Zep, Prince Rama, Codek records (a Funk Punk label), among others

Name three memorable album sleeves
there's so many extremely strong and innovative sleeves... I name 5 ;-)
I like the Physical Graffiti cut outs
Monty Pythons album sleeves are always a laugh...
One of Sonic Youth's albums has several cover options, at least in the CD version. You can choose your own out of 10 or so ? I remember the pictures, but I don't remember which album it was...that memorable...
Depeche Mode - Violator
Beck - The Information


Beatles or The Stones or Dylan or Pink Floyd or Led Zeppelin? why?
Beatles were first.
Can you really compare Dylan to Pink Floyd ? The latter were musically more innovative, while Dylan has the better lyrics.

What is the most embarrassing record in your collection? why is it there?
It's not there anymore...
One of the weirdest genres/eras was hair metal in the eighties. The musicians were technically very good, but the style and the styling... man... (and I did listen, and play, and still have a few records... maybe my Cacophony - Go Off album goes for 'most embarrassing record', although the guitarists (Jason Becker & Marty Friedman) are still among my all time heroes.

Which do you prefer - on-stage or in the studio? and why?
Stage, because of the interaction with an audience. I'm often nervous in the studio.

Describe your current/typical recording set-up (where and what)
At the moment it's all at home in a tiny bedroom, various guitars to various pedals to Hiwatt amp to ElectroVoice speaker to Condenser Mic to Golden Age pre-amp to Golden Age EQ to VLA optical Compressor to Otari 8 track. Often further to Focusrite to Mac G4 Laptop. My Tascam mixing desk doesn't fit, it is waiting for further action under the bed since we arrived in London... But recently I'm working with Jeremy Jay in his studio too. He's got a nice selection of mics to pre to Drawmer compressor to Soundlab mixer to Otari (the same!) 8 track to Pro Tools/PC

What are your recording/release/gig plans for the next six months?
Split 7" on Fruits De Mer/Static Caravan
Covers Album on Fruits De Mer (Friends Of The Fish) released soon
Recording an acoustic record for You Are The Cosmos and go touring Spain in spring 2017
Playing solo shows in England, Holland and Germany in January/February 2017
Working on the next full length studio album

We included a meal receipt of yours in the 'extras' with the FdM Live In London 7", but what's your favourite food?
I always thought pancakes were my favourite, but after several weeks of eating it a lot I tend to give the gold medal to Lebanese lentil soup for a while...

Cats or dogs?
I never had a pet, it was always my girlfriends who brought animals into my life. First a cat (has died recently) then a parrot (died back then / hung itself in its cage! / I still have one of his feathers), another parrot followed and that Ex took him with her as it was hers anyway, then came a Boston Terrier (stayed in Holland with my wife's parents and their other dogs, as London is not where he'd be happy to live)
I preferred the looks of the cat, but the dog is more crazy