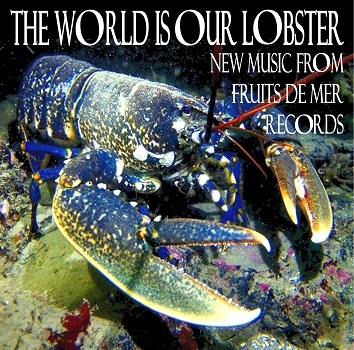 here's a preview of two of the tracks - from Stray Owls and Psychic Lemon...


and just for the hell of it, here's SilVer VialS playing a live version of their track, 'Sweet Life'...

The World Is Our Lobster
various artists

Our follow-up to 'The Half Time Orange' has been a bit delayed due to some stuff going on that's even beyond Fruits de Mer to control - but 'The World Is Our Lobster' is another storming compilation CD of largely new music from a mix of new artists and some FdM-friendly ones you might not have heard from for a while, but will be as pleased as I am to have back on the label - all tracks selected because I think they'll appeal to club members and NOT because the artists have crossed the FdM palm with silver - we don't do that sort of thing round here, we leave that to 'the magazines'.

The only way of getting hold of a copy (other than being one of the artists appearing on it) is to be a club member and to buy our late-July 2020 vinyl releases - either direct from FdM if you're in the UK, or from Nick Leese's Heyday Mail Order, if you're not.

The artists come from as far afield as Russia, Finland, Sweden, Spain and Scotland - Here's the full track listing:

2.Stray Owls - Snake In The Grass
from the album, 'Stray Owls vs Time & Space'

3.Stay - In The Hole
recorded in August 2014 during the making of the album, 'The Mean Solar Times'

5.Mark McDowell and friends - Breakthrough
from the Friends of the Fish album, 'Breakthrough'

6.James McKeown - Life Aboard The International Space Station
from the album 'English Dream'

9.Scott William Urquart - Ballet Dancer
from the album, 'A Recipe For Reverie’

10.Superfjord - Cut And Paste
from the album, 'All Will Be Golden'

11.Psychic Lemon - Seeds Of Tranquility
from the album 'Freak Mammal'

email fruitsdemer7@hotmail.com if you're not already a club member and you'd like to know about it.

Or if you'd just like to join our main mailing-list, click HERE and you'll hear about everything we're up to almost as soon as we know ourselves