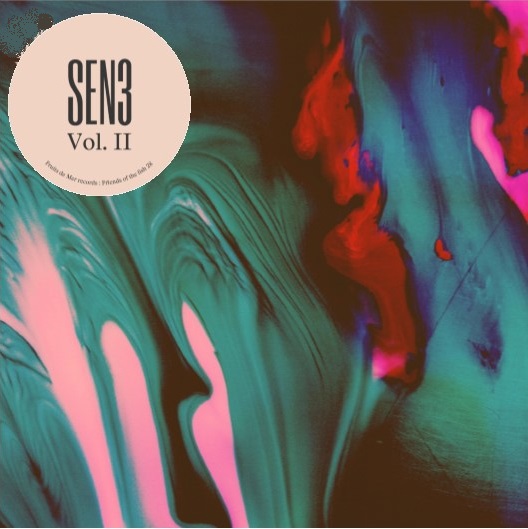 SEN3
VOLUME 2
limited-run LP (150 copies) - Friends of the Fish 28
on sale to club members, and at Ronnie Scott's launch gigs in April

An instrumental jazz-rock three-piece, SEN3 are Max O’Donnell, Dan Gulino and Saleem Raman; the band members have been in-demand as sidemen for the likes of Dave Gilmour and Pigbag but they got together to release their debut album, 'The Drop' in 2017.


"SEN3 are killing it, 'The Drop' is one of my favourite releases of the year and as a live band they are a force to be reckoned with". Nick Lewis, Ronnie Scott's

“SEN3 are in possession of a seriously unique and energetic sound - loving these guys" Tony Minvielle, Jazz FM


Now they are about to release 'Volume 2' and here they meld their jazz sound with rock elements that might be a tad more familiar to FdM fans - if you're enjoying Moon Goose, you might just be ready for a dose of SEN3!

The guys are launching the album at a series of prestigious gigs at Ronnie Scott's in London at the beginning of April, where they will be opening for the legendary Sly and Robbie, and Fruits de Mer is more than a little excited to be lending a hand by putting a six-track version of the eight track (no, not an eight-track) CD out on very limited-run vinyl - with just 75 copies available at Ronnie's and a further 75 to be offered for sale to club members after the gigs (the CD runs to 56 minutes in total, we can't fit everything onto two sides of vinyl).

It's been a bit of a mad panic to get everything together in time and there'll be something of a DIY element to the vinyl package - but FdM followers will be used to that!

Why so limited? Well, it IS a little bit outside FdM's usual remit so it might not be to everyone's taste (however much I may like it), but most of all because we had to go to a specialist short-run vinyl pressing plant to get it turned round within a matter of a few weeks rather than the usual few months (and no, it's not a lathe-cut - asking Phil at 345rpm.co.uk to hand-cut 150 albums would have kept the poor guy up all night for a couple of weeks!).

The album will include a download code for all eight tracks from the 'Volume II' CD AND their first album, 'THE DROP' - now i just need to find out what a download code is.

Just think - we'll be able to tell the grandkids we once had an album launched at Ronnie's! (to which they'll no doubt reply, "Who's Ronnie?")

find out more about SEN3 at www.sen3.co.uk