Friends of the Fish 13
Sendelica
'12 Shades' 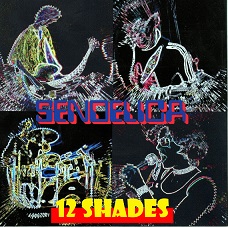 In 2006 Sendelica entered Mwnci Studios in West Wales to record their debut album 'Entering The Rainbow Light'. It turned out to be quite a fraught experience with two members of Sendelica leaving the band the following week over severe differences regarding the production of the album. Pete and Glenda dug deep, the other members parts were wiped from the sessions, and months of re-recording saw their debut album being released in 2007 on a handful of homemade CDrs on their own label FRG Records.
One track in particular emerged to be the blueprint of what Sendelica's musical journey would become, that track was called '12 Shades', a 17 minute 35 second epic that spurred the band on to a very prolific first ten years of recording.
On this, their tenth anniversary, we are proud to announce that Fruits de Mer's 'Friends of the Fish' spin-off label will be releasing a limited edition (107 copies) one sided duo colour vinyl LP remastered version of '12 Shades' for this year's '14th Dream of Dr. Sardonicus' festival in August.
The album will be in a signed hand made stickered coloured sleeve.
There will also be a limited edition (150 copies) pic disc CD in a card sleeve, which you can buy direct from Sendelica's bandcamp page


All copyrights reserved 2016
www.fruitsdemerrecords.com
...hear the tracks.. ..buy the vinyl.. ..smell the fish...