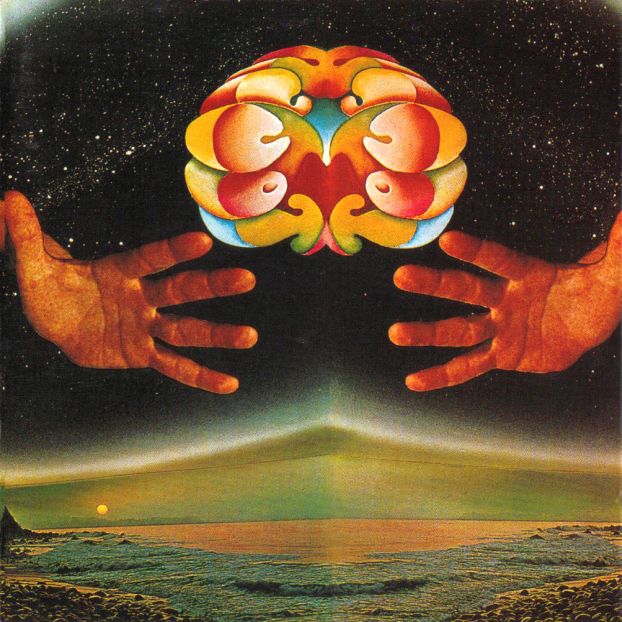 This is the incredible opening track,
'We Feel Fine'

If you're in the UK, you can order here (if you're not, please go to our SHOP page for options)

"TOP-CLASS 7inch re-issue of the year!" (Timelord Michalis)
"manically over the top, loads of guitar, and if anyone really wants to understand psychedelic progressive madness then this is the place to go" (progressor.net)
"Heavy, quasi classical rock spewing out all over the place, It’s like some strange mix of Atomic Rooster, Hair and the Bee Gees" (Terrascope)
"Brilliantly befuddled" (Mark Barton - Losing Today)
"it’s not something you’ll be able to play particularly quietly, so just evacuate the street, set your freak flag to stun and we’ll see you on the other side of Saturnalia" (Dave Thompson - Goldmine)

Fruits de Mer Records' first reissue single and, as it's 10 years since we launched with the intention of being a 7" reissue, it has to be a good one.

If you happen to have read Dave Thompson's book, 'The Incomplete Angler', you might recall that the 1969 LP on Deram by Touch meant a helluva lot to me as a kid - to the extent that I laboriously drew the band logo all over my school books and put their (slightly doubtful) poster on my bedroom wall.

The album is/was a wild, unique mix of US psych-meets-prog - over-the-top vocals, swirling keyboards, searing guitar, crazed studio effects; it's said that Jimi Hendrix called in on the studio sessions and was suitably impressed.

So when Cherry Red Records gave me the chance to put out a single featuring tracks from their one and only album, there wasn't a moment's hesitation....OH YES!

Amazing music and a bit of a dream come true, but the single had to have an extra something - and that's a track called 'We Finally Met Today', recorded for a 1968 single that never materialised and (as far as I know) has never been released on vinyl until now.
Add in a mini fold-out poster that replicates the one that was included with the original LP and FdM finally becomes the reissue label that Andy and I set out to be in the first place.


Prior to forming the group Touch, Gallucci arranged the album Elyse (Tetragammaton T-117,1968) for Elyse Weinberg and utilized the guitar services of Joey Newman on the same album. That same year he got together the three remaining members of Don And The Goodtimes together with new recruits John Bardonaro (drums, vocals) and Bruce Hauser (bass, vocals) and formed the group Touch. Theirs was a complete and radical deviation from the pop-style music that Gallucci had previously played and written. Instead the music reflected the times and was heavily tinged with psychedelia together with progressive overtones.
Recordings took place in an almost party-like atmosphere in Hollywood with such musical luminaries from the world of rock and psychedelia as Mick Jagger, Grace Slick and Jimi Hendrix all attending the recordings. The production work was entrusted to Gene Shiveley who had also worked on the Elyse Weinberg album together with Galucci and Newman. Both musical critics and fellow musician alike gave their approval to the tracks being laid down and there were high expectations for the album. The album Touch (London/Deram SML 1033/Colesium DS51004) was released in 1969 and for various unknown reasons it bombed. A 7" single, Miss Teach/We Feel Free (Coliseum 2712) was also released in a bid to obtain airplay for the album. To further compound the problems the group was facing, Gallucci refused to tour and there are stories of the group having to chop up their furniture to keep warm after the gas to their rented home was shut off. Interest in the group progressively waned resulting in their disbanding

Gallucci will probably always be best known as the kid who played the keyboard riff on the Kingsmen's classic recording of the song "Louie Louie," but it was this hit that forced him to leave the group. At the age of 15 he was not old enough to tour with them and thus it was that he later founded Don and the Goodtimes with drummer Bob Holden. (An early version of the band included Jack Ely, the vocalist on "Louie Louie.") They had a No. 20 pop hit in the US with "I Could Be So Good to You," produced and arranged by the legendary Jack Nitzsche. By this time earlier Goodtimes members had been replaced by vocalist Jeff Hawks, guitarist Joey Newman and bassist/vocalist Ron "Buzz" Overman.
In his as-yet-unpublished biography, Gallucci recalls that by the end of 1967, following the release of Sgt. Pepper's Lonely Hearts Club Band, the Goodtimes were beginning to feel like they were "just rearranging the deck chairs on the Titanic" and felt the need to move on. Accordingly he wrote what the sleevenotes to the Eclectic Discs CD reissue of the album calls the "Lysergic soaked" epic "Seventyfive," and Touch was born. Gallucci, Hawks and Newman teamed up with Hauser and Bordonaro and they set themselves up in a Moorish-style castle in the Hollywood Hills where they set to work on writing the songs for the album.
After signing with Coliseum Records, but before recording the Touch LP, the group recorded the music tracks for the Elyse Weinberg LP using the name "The Band of Thieves" after Elyse's song of the same name. Gene Shiveley engineered the sessions at Sunset Sound Recorders and the transition from those sessions to the sessions for the Touch LP was nearly seamless.
The Touch recordings took place in an almost party-like atmosphere with such musical luminaries from the world of rock and psychedelia as Mick Jagger, Grace Slick and Jimi Hendrix all attending the recordings at Sunset Sound studios in Hollywood with Gene Shiveley producing. Exactly how Shiveley and the band created some of the sounds on the album in these pre-synthesiser days is still a matter of conjecture as no one present seems to remember, but with the only unusual instrument on the album being a tone-generator it seems it was all done with the use of real instruments and ingenious production.
The band folded soon after the release of the album for personal reasons and not because of the legend "they believed that the music contained on it could never be replicated live", which resulted in them being unable to tour to promote it. This one LP has since been credited as the inspiration for the Brit progressive rock band Yes, a major influence on rock bands Kansas and Uriah Heep, and an inspiration for Genesis.

"There’s a bit in the press release where Keith FdM makes brief mention of buying the album when it came out and then obsessively drawing the bands logo over everything drawable, I mean what were you smoking, this is seriously fried groove. This is Touch and a handful of tracks culled from their debut full length originally dropped in ’69 and an aborted single release first time on vinyl all of which, apparently had a certain Mr Hendrix raising an approving eye brow to. Both barking and bonged, but in a good way, Touch’s mantra looked to be anything goes, seriously, literally everything from jazz, honkytonk, southern boogie to the skedaddled appear worked into a mutating musical mix bowl, just so off message and yet strangely ridiculously on the mark in fusing the various sonic ingredients of the day. ‘We Feel Fine’ opens their Fruits de Mer account, a wild scat cat of a cut, a whole wig flipping slab of freakery that features gospels, schizoid time signatures, wayward flowery psych mosaics, fractured and fried impromptu riff wigginess and la di dah organ meltdowns, I’ll warn you you’ll never be the same after experiencing it, kinda Gong rescoring ‘Jesus Christ Superstar’.
‘Down At Circe’s Place’ is mellower in comparison, to a funky and swinging key boogie they craft a crooked rock opera replete with phased vocals, mind altering motifs sourced from progressive tree hugging earth beat hysteria and a deranged prankster like impishness which even has a gong at the end – hello Queen. For those of you still standing on the verges looking slightly worried, parting track ‘We Finally Met Today’ might well prove to be your entrance in, at least it proves to be the nearest to a pop construct that your ever likely to be dealt with here, possessed as it is with a sun fried 70’s styled Beach Boys cool and some seriously tasty blues jazz boogie idents, smoking I believe is the term you’d apply.
Brilliantly befuddled."

and to finish, here's the remarkable 'Down At Circe's Place'

please email fruitsdemer7@hotmail.com if you're not already on an FdM mailing-list, so I can make sure you don't miss out on anything